The Catch22 Liverpool and Knowsley branch of NCS (National citizen Service) raised a massive £630 for the Basement Advisory Centre, through a range of creative fundraising events.

The young people in the group aged from 15 to 17 years, took ownership over coming up with a range of innovative ideas that would encourage people to part with their hard earned cash in order to support vulnerable homeless people in Liverpool.

Events included a fundraising day at St Luke’s (Bombed out) Church as well as a 9 mile walk along the promenade from Otterspool to Liverpool City Centre and back.

After the group’s hard work (and sore feet!) they celebrated their achievements at an official NCS regional ceremony which declared them as one of the groups in the Merseyside area to raise the most money for a charity. 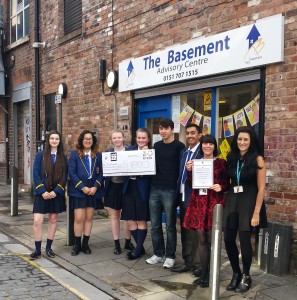 “The young people wanted to help those less fortunate than themselves in their community and felt that by raising money for The Basement, they would be able to make their mark on our city, where there are so many people in need of the help and support that The Basement offers.

The young people were deeply affected and inspired by the stories told to them on our visit to The Basement. This spurred them on to lead a successful week of fundraising that not only helped them to learn new skills and gain valuable experiences but also raise an impressive amount of money that they hope will have a real impact on the work that The Basement do. I am so proud of them and the work they have done.”

“It is inspirational that the group took the time to not only fundraise on The Basement’s behalf but also to come up with and organise their own fundraising events in their free time. The funds raised will provide a much needed cash injection for the winter months when our service is at its most busiest. At this time of year we can see up to 40 people a night visit our drop-in centre, the funds raised by NCS will make a huge difference to us and the people we serve.”

To find out how you can support the Basement visit our Support Us page on the Basement website and for more information about NCS visit: http://www.catch-22.org.uk/programmes-services/knowsley-ncs/ or contact the team on their facebook page https://www.facebook.com/liv.knowsley